When Former Board of Education Officials Go Low…

A former official from Montclair Public Schools publicly voiced his displeasure about our firm on Facebook. We thank him for the compliment.

For the past two years, we have been involved in heated litigation with the Montclair Board of Education. On behalf of two clients—the parent of triplets diagnosed with autism and the parent of a preschool-aged girl who is blind—we have fought to ensure that the board is fulfilling its legally-required duty to provide a free and appropriate education to special education students, and for the parents’ right to know if the services their children were offered are comparable to those provided to other children.

Specifically, in addition to pursuing available remedies under the federal Individuals with Disabilities Education Act (“IDEA”), our clients filed separate lawsuits against the board under the New Jersey Open Public Records Act, seeking access to public records, including settlement agreements, from the board to help those families determine whether the board is providing their children the same level of special education services as provided to other students in the district. The litigation has been intense, despite two different judges in these cases ruling that all the requested documents must be disclosed to the parents and our firm, and only after limited redaction. Our firm won these cases completely; every single argument made by Montclair was rejected by the court.

In both cases, the Montclair Board filed a number of court papers that sought to delay or overturn its responsibility to produce documents, even after it was ordered to do so by the court. This was especially remarkable in the second case, because many of the documents sought were identical to the ones sought in the first case, in which the Court had held that Montclair was intentionally flouting its order to produce the settlement agreements with limited redactions.

In the first case, the court ordered the parents of the triplets full access to the records, with only limited redactions. But the parents ultimately settled the case without receiving the records. So the second case had to be brought by a different parent. Montclair fought the second case as if it had not already been soundly rebuked by the court for its misconduct in the first case. Post-judgment motion practice (initiated by Montclair) is still ongoing in the second case.

The tensions in the litigation overflowed onto social media recently, as a former Montclair school official (the “document custodian”) accused our firm of playing a role in recent Montclair cuts to services and programs as a result of these lawsuits.

The “Share Montclair” Facebook group invites its members to make promotional posts on Fridays. Our firm’s Principal, John Rue, took the opportunity to post the following: 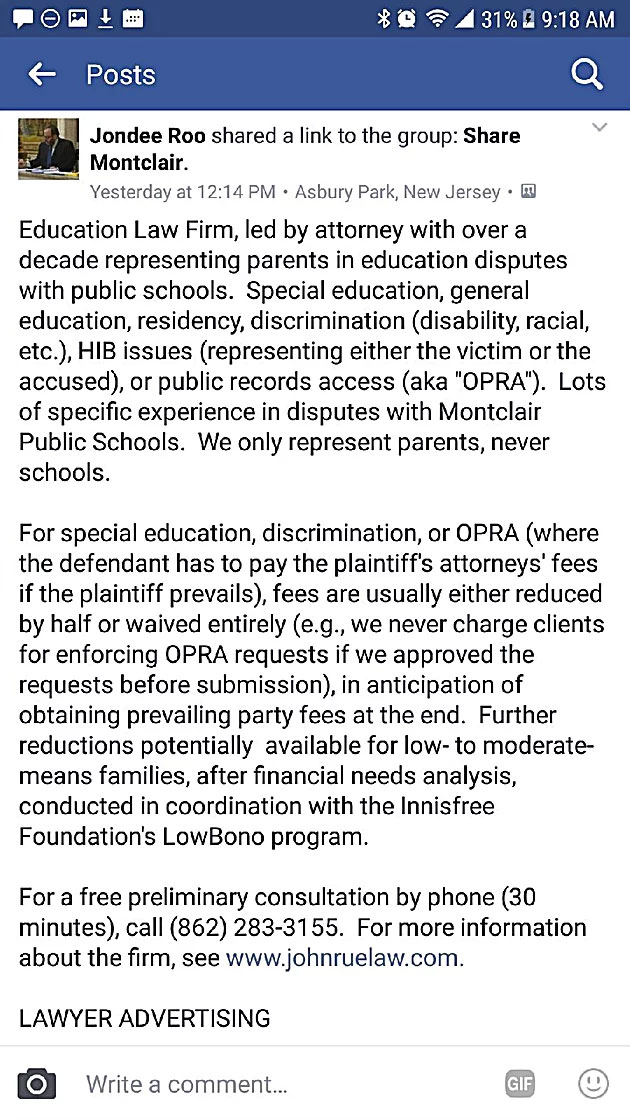 Brian Fleischer, the former Montclair School District custodian of documents, seized upon this relatively innocuous post as an opportunity to accuse us of harassing the school district with litigation. He seemed to link recent layoffs and cuts to Montclair’s programs with the board’s obligation to pay legal fees in the case involving the triplets with autism (which has since ended), and likely further obligation to comply with a court order in the second case, stating that our client is entitled to attorneys’ fees there as well. You can find screenshots of the back-and-forth between Mr. Fleischer and our founder John Rue below.

What Mr. Fleischer ignored in his comment is that the board did not comply with lawful requests for documents in these two cases. The judges in those cases ruled that our clients were entitled to those documents, and ruled further that the board must turn those documents over to our clients and us, and pay our client’s reasonable attorneys’ fees. In fact, the judge in the first case specifically found that Montclair had “purposeful[ly] disregard[ed]” the court’s orders. Because we had won these legal fights, both judges awarded our firm tens of thousands of dollars in legal fees that we incurred battling the board’s efforts to prevent us from obtaining these documents—even after the judges ordered the board to disclose the records to our clients.

Apparently, we struck a nerve with Mr. Fleischer. Mr. Fleischer would have been thrilled if our clients and our firm had simply accepted his illegal denials of our open records requests and walked away. But that’s not what we do. We hold public schools accountable, sometimes by challenging their improper denials of open records requests. We fight to ensure our clients and their children receive the appropriate level of special education services they are entitled to under federal and New Jersey law.

When we are successful in these kinds of cases–-as we have been against Montclair in these two particular cases–-our victories typically lead to unhappy school board officials who often believe that they (the school officials) should be the last word. But that’s not how it works. We live in a nation of laws, and under the rule of law. Where citizens are injured by the illegal conduct of government officials, they can obtain recourse in court–and the judge’s ruling is truly the last word.

Those government officials become even more unhappy when judges expressly rule against them and order them to give us documents, sometimes even noting (as here) the schools’ intentional and illegal misconduct. And you can imagine the rage school board officials probably feel when a judge then orders them also to pay our clients’ legal fees, as provided by law (e.g., OPRA or the IDEA) because we prevailed in the lawsuit.

Mr. Fleischer’s Facebook comments directed at our firm may have been the result of this simmering unhappiness left over from when he worked at the Montclair Board of Education. We make no apologies for his unhappiness, though we might have caused it. That is the price of our advocacy for our clients and our belief that we can do well by doing good. If Montclair wants to avoid prevailing party fees, it should refrain from breaking the law, rather than blame the law firm that beat them in court.

But we take no issue with Mr. Fleischer’s comments. We accept them as a compliment. We look forward to receiving similar compliments from former (or current!) school board officials in the course of our representation of our clients in similar lawsuits. Please contact us if you believe your civil rights have been violated by a public school, a charter school, or another government agency.